It’s been a while since I dropped new travel content onto the site. I could sit here and type countless excuses for my lack of updating, excuses that you’ve all heard before on countless different platforms all the time, but I won’t excuse myself. Instead, I want to dive into another travel chapter with you all.

I’ve delved back through my travel diaries to provide fresh content. Hopefully, my nostalgic ramblings will be as fun to read as they have been to write…

To inspire a book

Shortly before the UK entered a coronavirus-induced lockdown, I managed to squeeze in one small trip to Oxford.

Located in central southern England, Oxford is a city whose history is permanently intertwined with its prestigious university. But it wasn’t the oolitic limestone buildings that drew me to one of England’s tourist hotspots, oh no. I was embarking on a literary trail. The ‘city of dreaming spires,’ has inspired many famous novelists including: JK Rowling, Philip Pullman, CS Lewis, JRR Tolkein and Evenlyn Waugh – just to name a few. Like them, I too wanted to wander around the cobbled streets and drink in the city of inspiration.

I arrived into Oxford via a train after visiting a friend in Cheltenham. I can’t drive so the majority of my travel plans are mapped out via public transport routes. I normally book my train tickets in advance and always with my 26-30 railcard. If you’re travelling on a budget, these are two easy tricks that can instantly lower the cost of your holiday.

Oxford’s tiny little train station is a 10-minute walk away from the centre’s offerings. It was late afternoon by the time I arrived, so instead of rushing to a museum or darting into Oxford’s Covered Market, I navigated my way through the city’s centre and out the other side to find my Airbnb. I had picked a little studio apartment in the Cowley area, which was a happy accident considering this is Oxford’s foodie distract!

I had originally picked my little airbnb because of its good reviews, price and short walk from the city centre (about 15 to 20 minutes). A two-night stay for two people had set me back £200 (£100 per person). But we had the place to ourselves and it was clean and comfortable with all the amenities that we needed. My host had even left some chocolate and wine, so while I planned my evening, I indulged in those treats.

Then, with my backpack well and truly dumped, I headed to a nearby pub, the Cape of Good Hope (apt – much?), for a well-deserved pint. By now, it was around 5pm and my day of navigating Britain’s rail network had left me feeling famished, so it was time to for food.

As I sipped on my pint, I searched restaurant reviews on my phone. When I travel now, I’m eager to step away from the High Street restaurant chains in favour of local independents. And by sheer chance, Cowley was filled with the best. 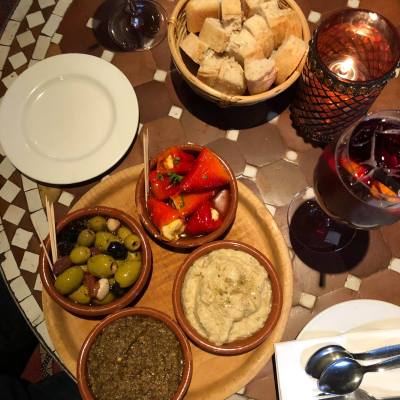 I decided to try and nab a table at Kazbar. A Spanish and Moroccan tapas bar on Cowley Road. I arrived minutes after the doors opened, and was seated straight away. Inside, the decor is souq like with north African lanterns dotted around the space and mosaic tables.

It’s an atmosphere where I immediately felt calm and as I relaxed into the cushions, I poured over the drinks menu. Without hesitation I ordered a large glass of Tinto – a drink I first sipped while on holiday in Islantilla last year. While I pondered over the mains, I ordered some olives, hummus, black olive tapenade and bread to snack on. Then, an array of tapas dishes arrived. I was too busy stuffing my face to grab a picture, but I can promise you this: the food was mouth watering. I even had to order myself another cocktail. This time an Aperol Spritz.

For me, this meal was a decadent experience and one that I’d been saving for – I didn’t want money, or lack thereof, to scupper a relaxing break. For two people (including a 10% tip), this cost £70, so £35.00 per person. While this is more than I’d spend on groceries in a week, it was a treat and we did have a few drinks here before we headed back to the Airbnb to hit the hay.

To Inspire a book

We left the Airbnb early, to make the most of our only full day in Oxford. On today’s agenda: Oxford’s literary hotspots. Our first stop? An eerily quiet Covered Market. This market features in Philip Pullman’s His Dark Materials Series. In Pullman’s book, his main character Lyra Belacqua is often found wandering around the market. In Lyra’s world, it sells fish, bread and other perishables. While the market wasn’t busy and bustling when I went to visit (as I’d pictured it in my head), it was nice to walk around without becoming part of a crowd. It meant I could browse the stalls at my leisure. And, from a little independent shop, I picked up a postcard to send to my grandad.

After I wandered in Lyra’s boots long enough, I headed across to the first museum of the day: Oxford’s Ashmolean. This museum was first founded in 1683 after Elias Ashmole gifted his collection to the university. As a result, it became Britain’s first public museum and the world’s first university museum. It’s worth spending some time wandering around this museum. The history of Elias Ashmole in itself is interesting and the museum contains a few objects of note including: a Stradivarius. For me, any antiquity collection is always of interest but museums are ever so personal, so head to collections you’ll find interesting. I picked up a museum map for the low price of £1. I always try to grab a museum map, not only does it give me a sense of orientation but it’s a nice memento for my scrapbook too.

Once you’ve had your fill of Egyptian artefacts, then I’d recommend a mid-morning stop at the museum’s rooftop restaurant. It boasts beautiful views of the university’s 38 colleges (for similar views head to the very top of Oxford’s shopping centre). Here, we halved a large slice of chocolate cake, while we guzzled on coffee. The coffee and cakes cost around £5 per person and the museum is free for all to enter.

Not content with visiting just one museum, I headed to two more museums after I did a spot of book shopping in some bookshops. I picked up two books while in my literary haven: Girl, Woman, Other by Bernadine Evaristo and Homer’s Odessy.

With my bag sufficiently weighed down with books, I head to Oxford’s Museum of Natural History. This museum was founded in 1860 and is home to many world famous highlights including the Oxford Dodo. Personally, I loved the dinosaur skeletons that were on display.

A second museum adjoins to this one, The Pitt Rivers museum. As we entered through its double doors, I shivered. It’s cluttered display cases and stuffed shelves reminded me of the Gyptians from Phillip Pullman’s His Dark Materials Series. I think it was the boats on the far while, that reminded me of Pullman’s water-faring characters.

I spent several hours wandering around these museum, both of which were free to enter. As I left the museum, I donated £5 and made sure to Gift Aid my donations. Whenever I’m a tourist in the UK, I’m extremely grateful that the majority of the museums are free to enter and my little trip to Oxford was a reminder that I should donate where I can. Otherwise, others won’t be able to enjoy these museums as I have in years to come.

By now, it was the middle of the afternoon and I’d certainly worked up a hunger. So, I decided to head to a literary haven: the Eagle and Child. This little pub is where Tolkien and Lewis used to convene to talk about their writing. Here, I sampled some local ales and ordered a fish pie off the menu (they’re renowned for their pies). As I sipped on my second pint, I felt inspired to pick up my pen once more.

To Inspire a book

There was one final tourist attraction that I wanted to pop into before my train home: Oxford’s Botanical Gardens. After I’d checked out of the Airbnb and was weighed down by my backpacks, I set out for my final slice of site seeing.

There was a drizzle in the air, but that didn’t deter my enthusiasm to visit Will and Lyra’s bench from the His Dark Materials Series. As the gates of the gardens opened, I bought a ticket (around £5 entry) and made a beeline for this last literary treasure. After a small photoshoot on the bench, I wandered around the rest of the gardens and off into the Greenhouses.

In the summer, I could imagine myself basking in the sun with a picnic, a book and notebook as I spent an afternoon people watching. But on this dreary Sunday, I was better off inside the confines of a coffee shop before I jumped on my train home.

Oxford truly is a book lover’s dream. While I couldn’t cram every site, restaurant and pub into my small trip, I fell in love with what I did get to see. Hopefully, I’ll return to the city in the summer for a second trip – where beer gardens and another literary trail will feature prominently!

And Ciao for now

Disclaimer: I went on this trip a few weeks before the UK announced its lockdown. I am safely typing this post from the comfort of my own home!

View all posts by hopebrotherton93